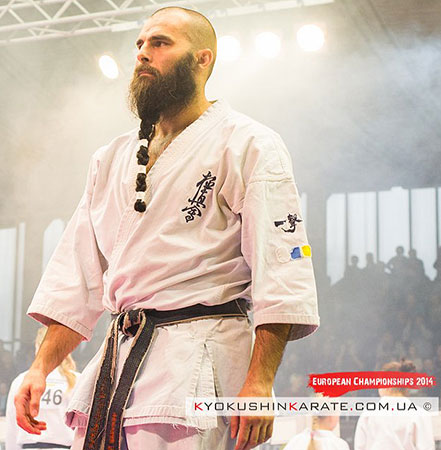 Alex, first of all, I would like to congratulate you on your long-awaited victory at the European Championship. Many people were saying that you were already tired and older than the other fighters, so you couldn’t compete with them. What is your opinion?
Hello! And thank you!!!
I understand what the people say, because the last two years were not successful for me in terms of results , but it’s been a great lesson. Because when you win, it means that everything  was good, but when you lose, that  makes you look for your mistakes, correct them and become much  stronger.
Tell us something about you, where were you born, where did you start to practice and who introduced you in martial arts?
I was born in the Canary Islands, in Gran Canaria. When I was 16 years old I was visiting my family who was living in Fuerteventura, a neighbor island. It was one of my uncles who brought me to Kyokushin for the  first time. I fell in love with this style from the «first sight».  Meanwhile, in my city I was practicing Taekwondo and Hapkido, it was another uncle who introduced me to it it’s been a year. At the age of  20 I moved to Fuerteventura and I started practicing  Kyokushinkai. My one and only coach  was Shihan Antonio Roca. He was my first coach  and everything I have achieved is because  of him, he is great teacher.

Who prepares you for tournaments and who helps you during the whole process?
For the last three and half years I was living in Costa Rica. Sensei Erik Goldberg brought me there, and now we are very good friends, he helps me a lot prepare each tournament since I live there. In Barcelona Sensei Angel Romero and Shihan Dani (Daniel Lorente) are my coaches, and  there is a mysterious friend of mine, who helpes me a lot too. ;))))

For the 29th European Championship you were preparing in the Canary Islands. Why did you choose exactly this place and when did you start to prepare?
I have spent a week in the place I was born, because I have my friends and family there. Each time I go there, my islands give me a lot of positive energy. For the last tournament I have started to prepare in December. Besides Karate I practice many different sports, I run, I swim, I do weight trainings and I’m practicing box. I love boxing.

At the last european championship,we were witnesses of an unfair decision of the judges. How can you evaluate their work and their decision according your fights?
I don’ like talking about that. To make their work easier, I will train much harder. ;)))

You have taken part in many European Championships, what impressions do you have after the 29th?
It was a big, high level tournament with amazing fighters and fights.

What fight was the most difficult?
It was thefinal fight, Zahary is strong and smart fighter, it was very close fight!

Which was the first tournament you won?
It was the 6th Open European Championship, held in Messina, in 2006.

Throughout your whole career, you had many fights and many opponents. Can you remember your most memorable fight?
There are several .In Messina, in that time I moved to Barcelona from Fuerteventura and could not celebrate this with the people who were preparing me to this tournament, and that made me sad.
Final from All Japan 2012, was a special moment for us. It was my opponent who won, and I was happy for him. To  fail in Kyokushin, means to fight not only against your opponent, but also against yourself, I think you understand what I mean ;)))) For me, failure, is when you stop dreaming, and stop believing in yourself.

Throughout many years you’ve been in many different countries. What country did you like the most and where would you like to come back again ?
Every country, Island, city, was different, but one thing is common, these are the people who I meet, and who are good to me.

In 2004th you passed the uchi-deshi course in Japan. How much time did you spend there?
It was a rather short, three months experience. I could  learn a lot, not only about Karate ,but also about life, friendship and many things. There I have made a lot of friends, Artur Oganisian, Max Dedik, Darmen Sadvakasov, Lechi Kurbanov, Alexander Pichkunov, Joji Hibino, Makoto Akaishi, and many others, My teacher was Shihan Fukuda, and I’ve learned from him a lot of important things.

You are known all over the world as a fighter, but do you also work as a coach?
Now is my time to fight.

Alex, we hope that you will please and amaze us with your wonderful fights and victories for a long time. We wish you luck for all the upcoming tournaments. You have a lot of fans all over the world, who want to be like you. What can you wish them and how can you support them, to make them always go ahead in spite of some defeats and never give up.
I can’t understand a life without passion, if you love something, do it with all your energy and with all your Heart and Soul. And when hard times come, be ready to learn, even under pressure, just enjoy it.
I don’t use such words like «I can’t» and «give up», and I’m very careful when to use «always» and «never».
After  all these years of  fighting, in the day of every tournament, I’m asking  myself “why I’m here again?”, and the fears are torturing me, but in this moment, I really start to  enjoy the fight. ;)))
Atis Tirma!!!!!