Home » Kyokushin interview » Lucian Gogonel: I teach karate because this is what I do best

Lucian Gogonel: I teach karate because this is what I do best 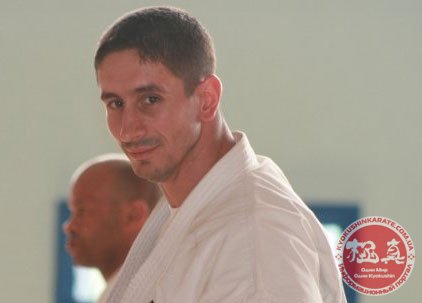 Sensei, first of all we would like to thank you for agreeing to give a short interview for our web-site.
Hi, thank you for asking me, it’s a pleasure.

Tell us something about yourself, where and when were you born, who brought you into sports, when was the first time you discovered the martial arts, who was your coach, was it only one Sensei, or you’ve had more?
I am born in a Romanian town port to Danube, Galati, where I lived till my 28, when I moved to Bucharest for a year before coming to France. From a very early age I wanted to practice martial arts but it was forbidden in Romania under communism so I registered for Greco-Roman wrestling classes but for a very short period. Then the revolution came and a high school fellow proposed me to join a kyokushin dojo opened in our town. There I met my first Sempai, Lucian Ungureanu, yellow belt at the time, but a very wise young man and a good teacher who made me love kyokushin karate. After one year he passed the dojo to one of his most advanced students, Sorin Fechet, my second and last Sempai with whom I did my first kumite trainings.

What was your first tournament, and your first fight? When and where was it, how old were you and what result you had achieved?
My first tournament was the National Weight Championship in 1991 in Bucharest. I lost from the first round of the first fight, I still remember, I was 18.
Taking part in the tournaments was it your personal decision or the one of your coach?

It was my personal will to take part in competition as I felt like I was the best in my dojo, in my weight. But it turned out to be very different from the kumite dojo, like a very difficult fight, harder than all the ones I experienced before that. I realized that I had to train much harder if I wanted to win a competition.

What can you say about your first European Championship, when and where was it, and were you feeling released by the result?
My first European Championships was in 1995, in Bucharest, the last competition before the Kyokushin Organization splits into several organizations. I lost my first match to a British competitor, but it was a good experience, it made me enjoying it even more.

For today you are a 6 times European Champion, and for 10 times you have been on the European podium. What tournament do you consider to  be the most difficult one?
The most difficult title to win was my first National Championship: I had 61 kg category lightweight and I had five fights. When I left the sport hall I could barely walk towards the rail station to take the train back home.

There were not many people expecting to  see you taking part at the European Championship in Berlin, what made you take this decision, did it have anything linked
to the fact that the Russian team was absent?
I decided it  along with some other members of the French Kyokushin federation, what fighters will take part in the International Championships. When I did the list for Berlin, I realized that the two best French middleweight fighters were not available for the competition. It meant there were no chances for France to win a medal in -80kg, and also a qualification for WT. This is what made me propose myself as I kept on training along with my students and I knew I was in a good condition. And it was one of the last chances for me to win a medal for France. Of course I took into account the Russian fighters weren’t there, but it was more like a bonus than a reason itself.

A lot of your supporters were admiring your fights, as despite your age your fights were very interesting and representative. As a lot of young fighters couldn’t go  against your experience, but one. In your final fight you have met the ukranian fighter Eldar Ismailov, what can you say about the fighter and about your fight?
It was a pleasure for me to fight with Eldar, as I was looking after  his way into kyokushin from the beginning. It was one of his best days, that day in Berlin. In the final I was pretty injured
so I couldn’t use my technics as I would have liked to. On the other hand, Eldar played well his cards: he lost a lot of weight for this tournament so besides being in top of his shape he was also very heavy.

It is well known that you have changed weight categories several times, oscillating from 70 to 90 kilos, what was the reason? Did you have any specific reasons, or you
just wanted to try yourself?
It was a question of me wanting to be as heavy as possible in order to increase my chances for the WT Opens. But it wasn’t a very brilliant idea as I was losing speed in every period where I was putting some weight on. Besides, I was a fake heavy weight, as I still had the power of a middle weight fighter. But I find it beautiful winning six European titles in three different weight categories,
so maybe it was a good idea after all.

In 2005  you have taken part in the 3rd World Championship in lightweight category, even if before you were a middleweight. Why did you have to lose weight and take
part in the lightweight category? We have some information that it was the only place available, it is true, could you comment on it.
In 2005, as it is now, the criteria to select fighters in Europe was the European titles. I had 2 titles in lightweight and one in middleweight. So I could have been selected in both categories for the WWT. But as I was champion entitle in middleweight so it would have been fair to qualify me in middleweight or let me choose. But the Europeans chefs decided for me to fight in lightweight. It was unfair but it ended up with the greatest victory of my career so I forgave them.

It was your first World Tournament, or have you taken part in such Championships before?
It was my first WT, first time I traveled to Japan.

Today you are not only a fighter, but also a coach. When have you started to feel the will of becoming also a coach?
Since I opened my first dojo in Romania I enjoyed forming fighters, kyokushin karateka in particular.

How many students do you have, what are their results and is the anybody who has achieved great results?
Five of my students became France champions. Among them Djema Belkhodja who won the European Championship once, several times the was ranked 3rd and 2nd in Open and Weight European Championships, and also in All American Championship. Recently he was ranked 2nd at the World Open Tournament.
Guillaume Grundler won it twice (2013, 2015), both times the majority of Guillaume’s fights were won by wazari or ippon.

You have two children, when they grow up will they take their father’s path? It is well known that sportsmen-parents frequently make their small children practice
sports, what is your opinion?
I «play» karate with my 5 years old son, and bring him to dojo from time to time but he doesn’t show a real interest. The important thing is to make him enjoy sport generally, I won’t push him to karate, if he or his brother choose karate I will be proud to teach them.

It’s been a long time since you are in Kyokushin ? Why have you chosen this martial art, what «conquered» you in it, what do  you like and dislike about
it?
It was a na?f choice at the beginning, I didn’t compare it with other Martial Arts, it happened to be kyokushin. But it fits me well; there are complex exercises, for all of our body parts so is good for keeping a good shape. I teach karate because this is what I do best. The inconvenient is that trainings are always in the evening so I give up time I could spend with
my wife and kids.

Besides Kyokushin, do you practices something else?
I did a lot of bodybuilding, as a complement for kyokushin, but now I realize it wasn’t such a good idea, as it made me less quick in kumite. But I didn’t compete in bodybuilding nor in any other sport.

Each student dreams about having the  black belt, when did your first Dan-test take place? How could you describe this challenge, and how much  time did it take you to  prepare for it?
I had my 1st dan in 2000, in Bucharest, under the directive of Shihan Loeck Hollander. I prepare it and I was ready to pass it…years before that! I had 11 years of practice already, and three years before, we (me and other Romanian fighters and instructors) thought during every summer camp that we going to pass our dan test but there were always something that postponed the
event.

What about the other Dan-tests, how long was the time between them?
I had my nidan in France in 2002 with sensei Bertrand Kron (IKO at that time). I had my 3rd dan in 2005, after an examination under the directive of Kancho Matsui en Bulgaria. My 4th dan I passed it in 2012 with Kancho Matsui and Shihan Gorai, at Mitsumine Camp.

This autumn is very important for all the Kyokushin World-as we have the World Open Tournament, and then the European Open Tournament. Are you going to take part in any of these events? If yes how do  you prepare for these tournament, who
is helping you?
I will participate at the WT in November this autumn but not at the European Open. I prepare it by training every evening with my students; two of them are also preparing this event. We have three types of training: technics, cardio (pure and specific kyokushin) and a lot of sparring. I try to always vary trainings so that I as well as my students enjoy time in dojo. I also do
stamina training at home in the morning.