Home » Kyokushin interview » Oleksandr Ieromenko: No matter what happens you should act like a man

Oleksandr Ieromenko: No matter what happens you should act like a man

Congratulations to you Oleksandr. The whole country is very happy for you success during the All American Championship. As there was no streaming of the Championship, we don’t have a lot of videos. That is why everybody would like to know how was the tournament going on, and some more details of your performance.

Thanks a lot. I felt a lot the support of my Country, and of my friends. It happens that there are no weak  fighters on this Championship. Even the less known fighters, those who  are fighting for Canada, North and South America, are very strong and do not give way in front of the top fighters. I would like to mention that they do create real problems on the way to the pedestal.
This year’s tournament was not easier than the last year’s, maybe it was even more difficult. There were more fighters this year. There are not 20 people, as it was before, but already 40. There were a lot of serious and strong fighters, and each one could be considered as a favorite fighter. From all the fighters I didn’t know only 7, and these were the fighters from the North
and South America. But looking at their fights I understood that they are not the weak fighters. They were competing with Russian fighters almost at the same level. As the last year, this time I
was supported by my countrymen from Kherson, those who now are living in New-York. This year, I had a pleasure to see among my supporters an old friend of my father, who also lives in
New-York. Seeing their happy faces was making me feel almost at home, near my beloved people. A big thanks to them, because they have spent a whole day with me!

If talking about your performance. You began your fights in the second circle, and your first fight was with a representative of the Russian team — Khusein Elikhanov. We have all seen the result of the fight, what can you say about it?
It was a fight with a very well-known and titled fighter from Chechen Republic. It’s been a while since he is training with the legendary Lechi Kurbanov. I remember in 2007 I was following
his preparation with Lechi Kurbanov and Ramzan Kadyrov, for the Open World Championship. Back in 2007 me myself, I was training using this video. The
fight started with exploring each other’s style. There were some kicks, and I felt that he was a strong fighter. And afterwards, I have just tried the ushiro-mawashi technique. I didn’t know it will end up like that. If I had known before, I would have made it differently. I don’t know whether he is ok now,as the was hospitalized directly after the fight. They say that his jaw is
broken. I pray to God for him, and I wish him to get well as fast as possible.
But that’s our sport, we’re just doing our job.

What about the next fights?
By an irony of fate, all the fights I had were with the representatives of the Russian team. I wouldn’t like to make allusion to any political issues, but I managed to win all the fights. All of them were very titled, strong fighters and it was only with Ilya Karpenko that I was fighting for the second time. I have already won against him, during the final of the European Championship, that took place in Hungary in 2012. My second fight was with a fighter from Moscow, Beka Kurtsikidze. It has also ended with «ippon”, afer a successful «heisoku jodan”.
My third fight was also with a Moscow fighter, I’m talking about and amazing person and fighter David Navoyan. I have won this fight in the first time, by judges decision. In the semifinal, I met the Russian Heavyweight Champion, David Sarhoshyan. I could win only in the third time. I would like to mention that this guy is very strong, and he had won the «Best Spirit” trophy.
I would like to mention the fact that I had almost no recovery between the fights. The break between the semifinal and the final was about 15 minutes, if not less.
But I had to collect all my will and prove that the last year’s victory wasn’t just a random win. So the final fight I had with a well-known Ilya Karpenko. He is a high level
fighter, so that there is no need to count all his achievements. As both of us knew the technique of each other the fight took a long time. As at the end of the first, and of the second time I’ve accelerated, the judges’ decision was that I am the winner.

With  whom would you like to  meet on the tatami? Despite of the draw.
During this Championship, Shihan Vsevolodov told me that is was indispensable that I had the fight with the competitor from Japan — Syohei Kamada. I was telling myself exactly the same
thing, but the Japanese fighter had lost to  David Sarhosyan.

Was it more difficult to  win this year, or in 2014?
I was asking myself exactly the same question, but I couldn’t find the answer. To my mind this year it was as difficult as the last
year.

One day before the tournament, your namesake sent you a video message, did you feel much stronger? You are great friends with Alejandro Navarro, what have you learned from him?
From the moment I got his video, I kept it for myself, as it concerned only us. During the Championship I was frequently thinking about the advice he gave me. And of course it was giving me more power. Besides his great technique, I have learned one important thing from him, no matter what happens to act like a man! As he is a real man. For example, can you remember a fight where he was showing that his opponent had hit him in the face? I haven’t seen any! I’ve learned a lot from it and I try to teach my students this way.
This fighter motivates me a lot. He is showing that nothing is impossible and thatyour age can’t stop you in achieving your goal. I respect him a lot!

How and where have you celebrated your victory?
This year all our friends from Kherson have invited us to a Ukrainian restaurant, so that we could feel the atmosphere and the cosiness of the motherland. It was a real pleasure, and we are very thankfull for it!

Are you going to take a rest till September, or will you start preparing once you’re back home?
I need some rest. After the European Championship I couldn’t have a rest, we have started preparing to this Championship once we were back. I would like to thank my Shihan for his help. Every single day he was assisting me in my trainings, despite his pain in articulations. He was calling me every day, asking about my health, this was giving me great power and self-confidence. I had to meet his expectations. Now we’re going to take a rest, think about the drawbacks and we’ll start again with new power.
I would also like to thank my Shihan, Serghei Vsevolodov because of the fact that he could take in charge my participation at this tournament. Because of him I have the possibility to take part at such a big and important tournament. I would also like to thank my family, my mother Elena and my sister Ananstasia. For all the support they gave. Great thanks to my «mother” Kyokushin Karate Federation, especially to Platov Alexandr, Fokin Anatolii, Sotsenko Vladimir and Cerneavskii Leonid. Also to Peshenko family – to Konstantin and Nikita. For their understanding and their support in my most difficult moments.  To all the young fighters I would like to advice to believe in God and in themselves. Everything that we achieve, is given to us by God. If I lose tomorrow, it means that it was meant to be like that. All you have to do is believe, and the better days will come.
Roman Odessky
translation Iavorscaia Nastasia 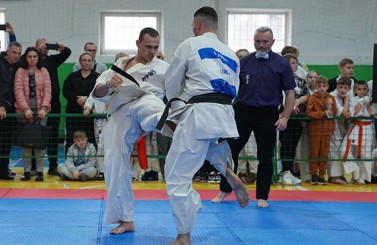 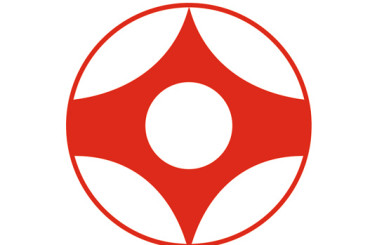 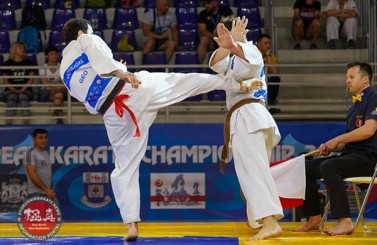